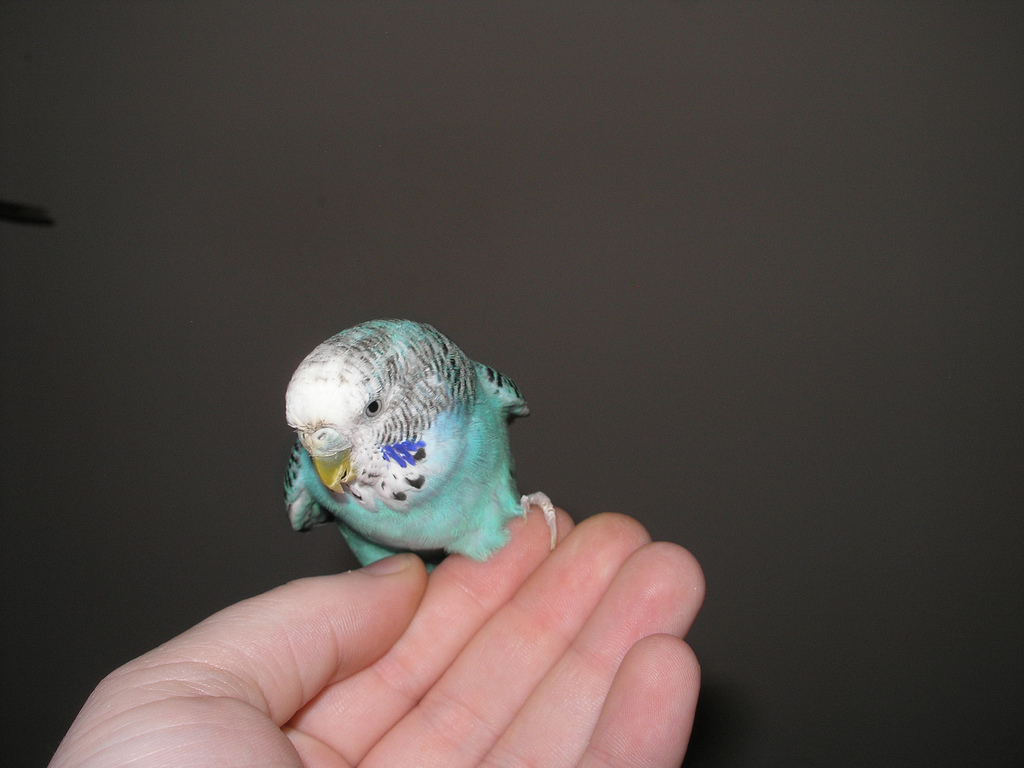 Yesterday, January 13th, 2009, at approximately 10:07 p.m., my avian companion of 5 years and 11 months, Dimitri Shostakovich, died.  That is her on the right, in a picture taken last summer.

At approximately 7:30 p.m. last night, I checked in on her as part of my daily routine. Well, and partly because I liked to visit her when I was feeling anxious.  I discovered her sitting on the bottom of the cage with her wings spread.  I wondered if she was attempting to lay an egg, and grew concerned because I know that parakeets especially are especially vulnerable to problems when this occurs.  I did not view this as a likely event, however, because she never laid an egg in the previous years.

I pulled her out of her cage and examined her for possible problems.  There was something definitely wrong, but there wasn’t anything I could do.  She grasped by fingers strongly, and I thought that was a good sign.  I made a nice nest for her using old t-shirts and a shoe box, and she settled in, not moving much.  Every once in a while she would move her head and readjust herself.  Then, at around 10:06, she attempted to fly one last time.  She couldn’t get airborne.  And then she was still, never to move on her own again.

I watched her chest carefully for any signs of breath, hoping to see any kind of movement, but it was not to be.  Intellectually I realized she had died, but there was a feeling of detachment from the situation, as though I was watching a movie instead of actually experiencing the death of my dear friend.  The feeling has yet to leave me.

A flurry of thoughts surged through my mind in the following minutes.  The first was the irrational need to cover the body.  Even though it felt like I was rejecting the reality of her death, I still covered the nest with another t-shirt.  The second was more practical in nature: I am going to need to purchase a shovel.  I did not like that thought, but it was stuck in my head and would not let lose.

It was late, and I was extremely tired.  Yet, it felt wrong to just go to sleep.  I didn’t want to do anything really.  I went outside and went for a walk, trying to clear my head.  Ironically, when I got back inside, the first thing I did was head to her cage to see her, like I had done so many times before.  It had always been comforting to have a bird that didn’t care about money, or girls, or social anxieties, or school, or anything.  She would always climb on my finger and say hello.  She liked to chew on my eyebrow, probably because of the salt from perspiration. Many times, if I was in another room working on something, or watching tv, she would fly out and land either beside me or on my shoulder.  Well, there was one period in my life when she really liked landing on my feet, goodness knows why.  I guess the white foot mittens drew her in.

This afternoon I buried her.  Her body now occupies some space beneath the frozen ground in a local park.  She’s beside a tree that I’d like to think she would find enjoyable.  I don’t know why that matters.  I know it doesn’t matter to her.  For all intents and purposes, she ceased to exist the moment her brain ceased functioning.  The only meaning her burial has is the meaning I assign to it.  I suppose in that sense, it’s important.  As I handled her body for the last time, I was amazed at how soft she felt.  She didn’t feel any different, except for the lack of life signs.   The whole experience was surreal, and continues to seem that way.  My sorrow has only begin to set in.

At 10:07 last night, Dimitri Shostakovich turned into an ex-parakeet.  She will be missed.