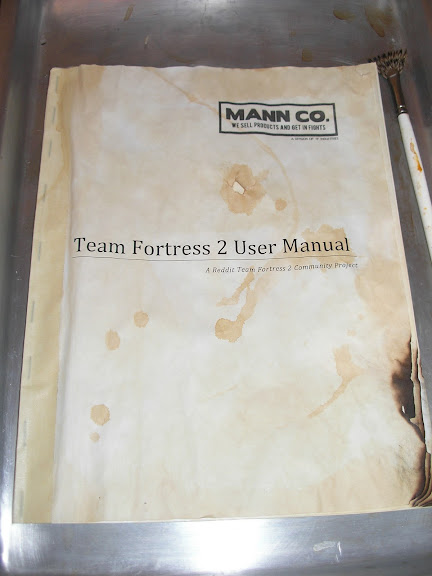 One of the coolest games I’ve ever played is Team Fortress 2.   While it’s tons of fun to play, one issue with it is that it doesn’t come with a manual.  Just over a week ago, reddit user ‘lolard’ posted this to the new to tf2 subreddit, asking us to solve this problem.  The reddit community responded.  We fired up an etherpad clone and got to work.  Here’s what we accomplished:

The list can go on.  The message is clear: this has been a massive collaborative work that has produced something amazing in a very short amount of time.  I’ve been involved throughout the whole process, stepping up soon after lolard made the first post.  From this perspective, I’ve learned several things.

I can’t emphasize enough how much this changed my view of collaboration.  This has been collaboration how it’s supposed to be done.  While reflecting upon this experience, I’ve identified several reasons I think this went so well.

The biggest theme is that while we were all very good with technology, the technology was completely transparent.  We didn’t have to think about it (except when it broke, like with the time slider).  We just focused on what we were trying to do, and then we did it.

It’s been an amazing experience so far, and while this project is far from over, our parts are winding down.  Soon, we’ll have a nice manual for team fortress 2 users to go with all this valuable experience we’ve gained.

The iPad has been making a splash in the gadget world, and I’ve been strongly tempted more than once to go ahead and purchase one.  For now, though, I’ve been able to resist, and I am hoping to hold out for a Notion Ink Adam.  Pixel Qi screen, Rotatable Camera capable of recording HD, HDMI out, Android with Multitouch?  I’m sold.  But this post isn’t about that.  It’s about one of the reasons I want a tablet so bad:  Being able to use it while teaching.

Currently there are a few tablets that are available for use in the classroom.  The problem is “Tablet” is used in a bit of a different sense.  The tablet I have available to me is the Airliner from Smartboard.  This piece of hardware is truly a piece of crap.  Half the time it won’t connect to the computer, and when it does connect, the software fails to function correctly.  There is a better way to handle this type of functionality, and I think I’ve found one.

One issue with using a tablet like this is usability.  You’re controlling the computer through the tablet, but you can’t look at it.  It would be better if you could get a copy of the screen on the tablet itself.  Well, with these new tablet computers, it’s possible to do that.  You just need to setup a VNC server on the computer you want to connect to, and a VNC client on the tablet.

Well, I had the opportunity to borrow one of our faculty member’s iPads and go ahead and try this out.  There’s a lot of idiocy in this institution about network security and such, but I was able to finagle (to use a technical term) the server installation such that I didn’t have to go through IT to enable this functionality.  However, the iPad was having trouble connecting.  So I decided to use another computer in to test the connection.

I didn’t have a VNC client on any of the student machines available, but I did have one on my desktop computer upstairs. So I logged into one of the student machines, and used the Microsoft Remote desktop software to connect to my workstation.  Then I was able to use the VNC client on my workstation to remote into the instructor machine at the front of the classroom.  Everything worked perfectly.

Then I had a thought.  We run a piece of software called iTalc that enables us to view the screen of any of the students computers.  This piece of software is amazing, and I use it constantly while teaching, for diagnosing student problems, letting students demo different things from their computer, and proctoring tests, among other things.

So I opened up iTalc to open up the screen of the student’s computer I was on.

The circle was complete.  I was remoting in a complete circle using three different pieces of technology on three different computers.  I got a nice looking mirror effect on my computer, but I was also able to close it all down easily.  Here’s the final picture:

Just a bit of fun.  Unfortunate the wireless bandwidth around here is so crappy the iPad was practically useless as a VNC client.  I’m going to have to figure out something else.

Back in August, my MBP developed some hardware issues that required a visit to the Apple store.  The Kansas City Apple Store happens to be on the famous Plaza, and very near to a Barnes and Noble.  So during this time, I ended up spending a large amount of time browsing books at said store.  As I went through the store, I happened to wander over to the science & technology section where my eyes fell upon a book with a very strange title:  “Everything Bad Is Good For You.”  If that wasn’t enough to pique one’s interest, the subtitle would be: “How today’s popular culture is actually makeing us smarter.”

Needless to say (but I’ll type it anyway), I was extremely skeptical.  Never-the-less, it was a provokative enough title for me to pick it up and turn to the first few pages.  The author, Steven Johnson,  begins with a discussion about a precursor to the modern fantasy sports games.  The story was engrossing enough that I went ahead and purchased the book, and once I was home I devoured it.  I just couldn’t put it down.

Johnson describes what he calls “the sleeper curve.”  His basic argument is that popular culture requires an increasingly complex involvement by the consumer to fully enjoy.  He supports his arguments with several specific examples taken from tv shows like “The Bachelor” and “The Sopranoes” and video games like “Zelda.”  I’m not much of a popular culture participant, and was unfamiliar with all three of these, but this did not hinder my understanding of his argument.  While I had started reading the book quite skeptically, by the end, I felt like he had made a good case using the examples that he did.  However, I do think his argument benefited from a selection bias to begin with.

One of my main criticisms is how citations and the bibliography were handled.  There were no in text citations.  The bibliography contained a snippet of the text where the information was used and then the source itself.  It’s a painful way handle sources.  One nice consideration was a section on suggested further reading, however.

Overall, this is a very worth-while book, and while I’m not completely convinced by his argument, I have to agree that Johnson is certainly on to something.  Published in 2005, it is available from Amazon.com, and other retailers.

Other Book Reviews Coming Down the Pipeline:

1) The Tipping Point and Blink by Malcolm Gladwell

I realize I’m a bit behind the times, especially with gladwell’s books, but I don’t personally know anyone else who has read them.

I’m an Apple fanboy.  I own a Macbook Pro, an iPod, an iPhone, and I’ve spent countless dollars in the iTunes store.  Sure there are a few things I really can’t stand, like the lack of control over my iPhone, but it’s manageable.  Overall, I’m pleased.  There is a distinct improvement in the quality of software when moving from a PC to a Mac, and that has been the biggest thing driving my praise.

However, I’ve been noticing a trend from Apple.  They treat their independent developers worse than microsoft does.  There is a very low barrier of entry into writing software for microsoft.  There are countless articles, podcasts, and videos available to help someone get started, but also help all levels of developer.  With Apple, it’s extremely difficult.  I’ve been on the lookout for even a book that helps someone get started in development on Leopard.  There are reference books available, and books that are targeted at earlier versions of OS X, but nothing recent.

But what brought on this most specific rant?  This posting from macworld, announcing that the videos from WWDC (the apple developers conference) had been made available on iTunes U.  That sounds awesome, and I headed over to check it out immediately.  Unfortunately, these videos are free, but only to those developers that have paid $3500+ to become an apple “premier” developer.  Compare this to say the availablility of all the Lang.NET 2008 conference videos for free. You don’t have to sign up for anything.  The videos are listed in a clean interface and you can just scroll and download.  Things can’t get much better than that when it comes to developer videos.

I finally downloaded it today, and I’m installing it now. The only thing I’ve ran into so far is the fact that my laptop and the kernel’s acpi code don’t work together that well. I just disabled it and was on my way. The most impressive thing to me so far, however, about the Ubuntu distribution, is the way they’ve set up their community. Check it out over at Ubuntulinux.org. This appears to be one well organized open source project, and I applaud them.